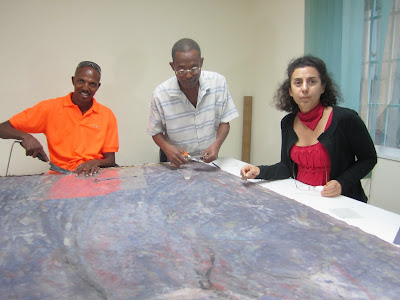 Thousands of paintings have been rescued from the rubble of collapsed museums and galleries in Port-au-Prince after the devastating earthquake of January 2010. The artwork was brought to the Smithsonian Institution’s Haiti Cultural Recovery Center (CRCH) to be conserved by US professionals under the direction of Chief Conservator Stephanie Hornbeck.

In July 2011, after finishing the St. Trinité Episcopal Cathedral wall paintings removal, I was contracted to work as the Chief Paintings Conservator at the Center a building that had survived the tremors http://haitiartconservartionla.blogspot.com/. By the time I arrived, after rescuing 3 wall paintings at the Holy Trinity Episcopal Cathedral, the disheveled office space was turned into fully equipped paintings conservation “atelier”. I found an overwhelming amount of paintings severely damage and in need of urgent care. Just one single of these wrecked pieces would have been a major challenged in any museum around the world. But at CRCH decisions needed to be made, there was no time for mourning or being intimated by the scary sight of the damaged paintings. We had to select the best treatment possible using our professional skills, creativity and the materials that were available to as. 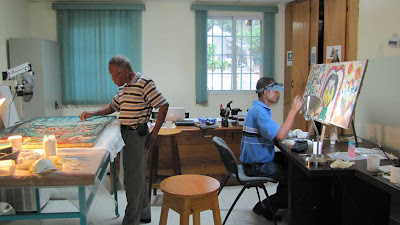 I was lucky to be able to discuss conservation treatments with 3 invaluable AIC Professional volunteers that came to work with us at the Center: Mark Aronson, Liza Mehlin and Anton Rajer. Volunteers came for 2 week terms in the course of 4 months.
From left to right Haitian artist: Frank Louissant and Jean Menard Derenoncourt
Painting by Max Pinchinat was conserved by Lisa, Mark, Viviana; assisted by Frank, Erntz and Jean Menard. The piece presented one of the most challenging structural problems. It took 4 months to conserve. 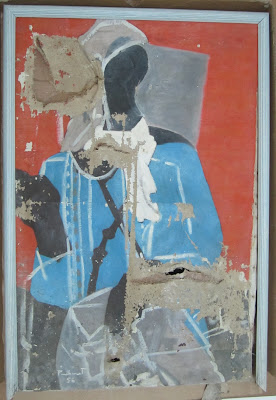 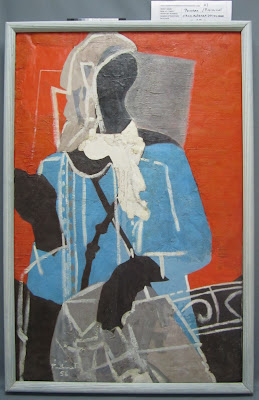 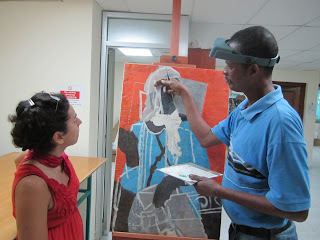 We also trained 3 remarkable Haitian artists from the Ecole Nationale des Arts (ENARTS): Jean Menard Derenoncourt, Franck Louissaint and Ernzt Jeudy. These artists apart from being personable and fun to be around proved to have great skills for the tedious conservation treatments and showed serious commitment to the work they engaged in. They enjoyed learning about the theory behind conservation and were thrilled to be rescuing their Haitian Patrimony. They took pride on what they were doing. Our project was successful and an important legacy for the future of Haitian Culture.

”L’homme et son Chat” by St. Louis Blaise. The vertical tear required securing the gap with fibers and then lining. 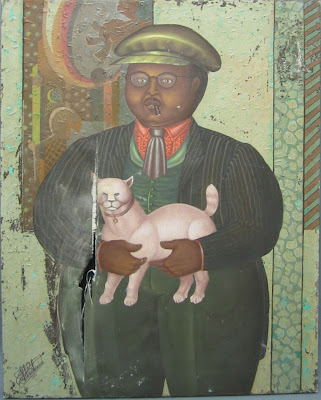 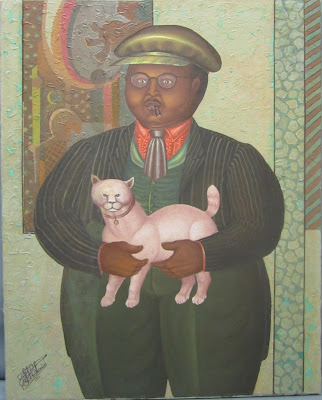 Conserved by: Viviana and Mark. Assisted by Jean Menard.
Before and After Treatment : Painting by Jean-Claude Gauroute, dit Tiga. The horizontal tear almost divided the piece in two paintings. 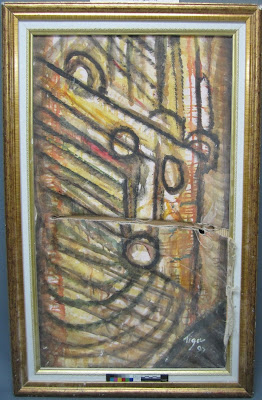 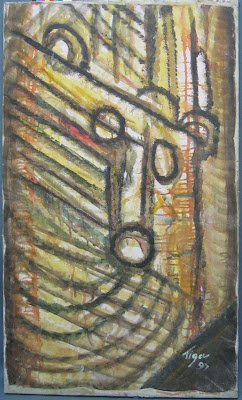 Conserved by: Tony and Viviana. Assisted by Erntz and Jean Menard
Photo: During inpainting 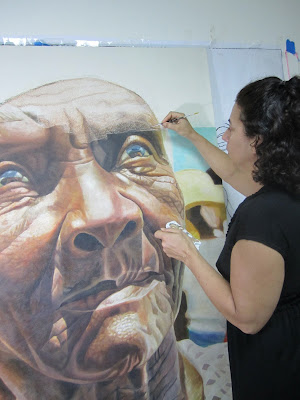 The painting by Mario Benjamin, one of Haiti’s leading contemporary artists, was rescued in two separate pieces by Patrick Vilaire and team from the rubbles of the Presidential Palace. The 58 tears on the canvas were patiently repaired and the pieces assembled by Kristín Gisladóttir, paintings conservator from Iceland, assisted by Frank and Jean Menard. The team did a remarkable lining job. 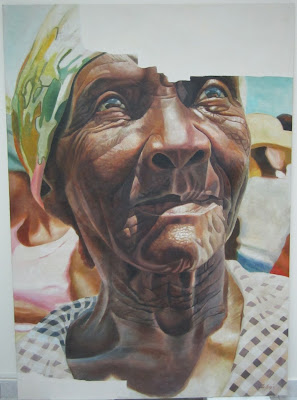 My task was to inpaint (retouch) the large lacuane which represented a real challenge. The 'lacunaes" (large losses) became part of the history of the painting. So I had to find a way to retouch this large empty areas in such a way that would allow the viewer to recognized the losses but at the same time allow a fluent reading of the painting. With the help of an old photograph I stipple painted hundreds of thousands of small dots that just like Seurat’s “pointillism” bringing the image back together. 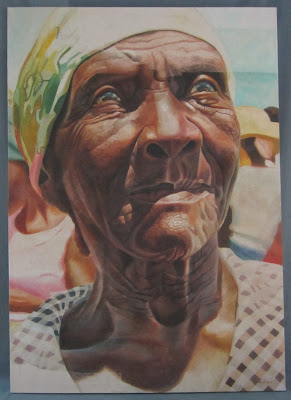 Before and After Treatment: painting by Stivenson Magloire. Rescued from her gallery by Maria Isabel 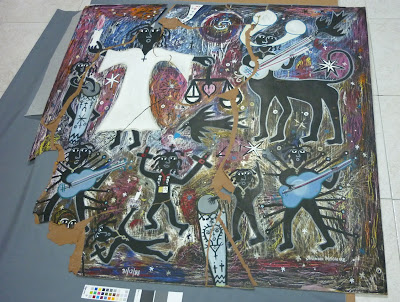 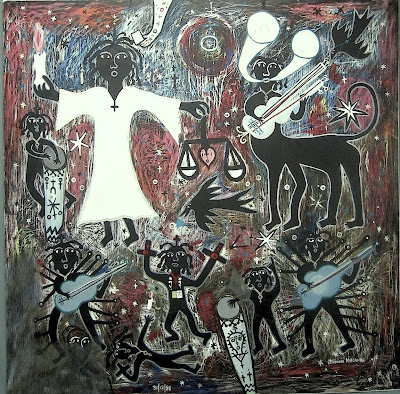 Conserved by: Viviana, Saori Kawasumi. Assited by: Erntz. The painting had to be puzzled together

I discovered the marvels of Haiti art, an area previously unfamiliar to me. I have learned about their perspective towards life, beauty and their dreams through the paintings I have conserved and by sharing time with the Haitian artists. The Haiti Cultural Recovery Project has been a transcendent experience for me. 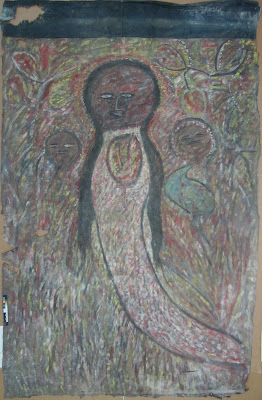 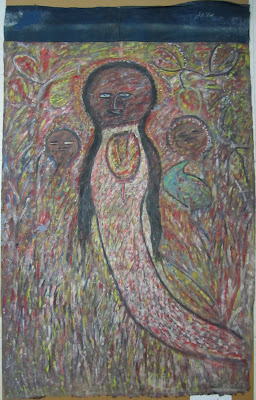 Conserved by: Viviana assited by Erntz and Jean Menard
Before and After Treatment: “Philomé Obin et ses clients etrangers” by Philomé Obin 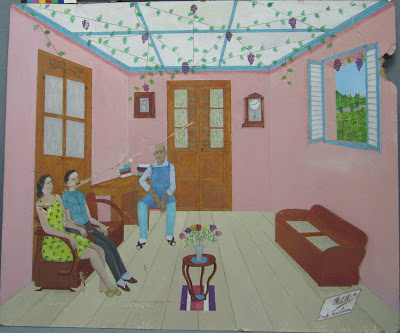 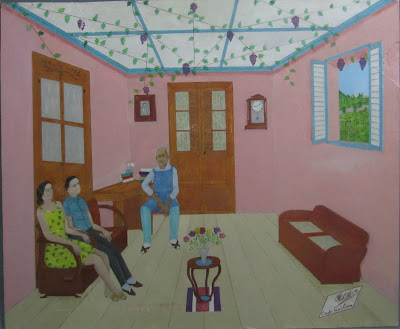 Conserved by: Viviana assisted by Ernzt and Jean Menard
Before and After Treatment: "Ville Imaginaire / Tour de Babe" by Préféret Duffaut. The right lower corner was crashed into multiple pieces. 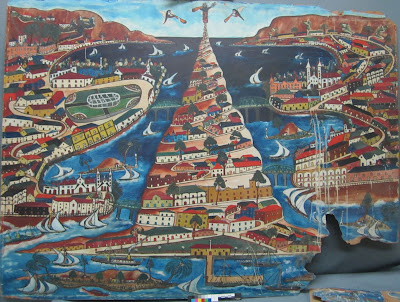 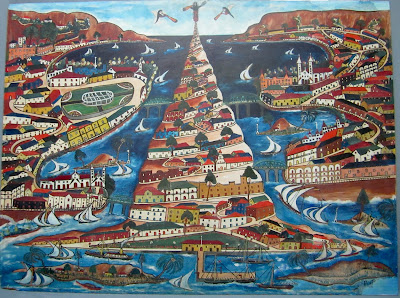 Conserved by: Viviana assisted by Jean Menard and Erntz
Before and After Treatment: painting by Bourmond Byron. Representing life in a small countryside village 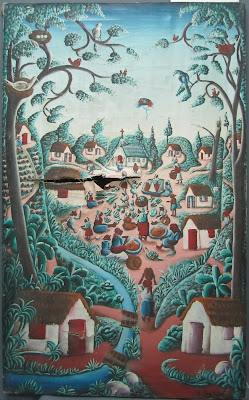 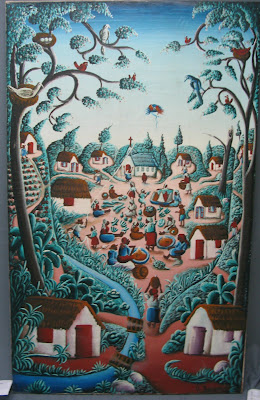 Conserved by: Mark and Viviana assisted Frank and Jean Menard
Before and After Treatment: Painting by Jaques Laroche, representing street Scene in Port-au-Prince. The piece was torqued due to water damage. 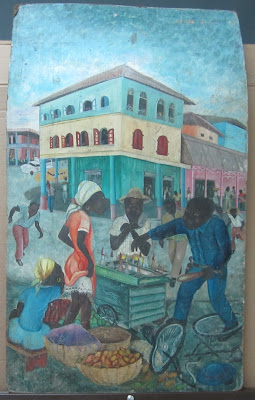 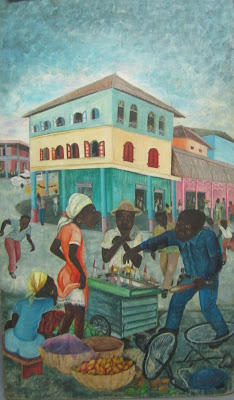 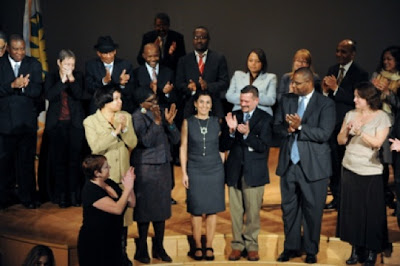